Is there a way we can perhaps combine the “preview” view with the actual editor by default? 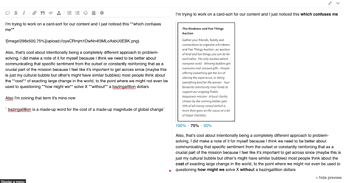 Basically just view any formatting in real-time, one window. I can think of a few examples of markdown editors that do this well, Bear is a common note taking app.

I think the only people who probably would make use of the non-wysiwyg components would be us, but we could just use an eyeball icon to toggle wysiwyg view like in this example using dillinger

the composer takes a lot of real-estate even when it’s in it’s “compact” state, and that’s only on a laptop. On a phone or tablet, it becomes pretty obnoxious and sometimes I find myself just cutting my losses trying to respond to something because I get annoyed having to expand/collapse the editor try to remember the points I’m responding to. That’s a ux issue but knowing it’s a problem vs fixing it are two separate things!

For moble, could we have a more compact editor that only expands to accommodate what you have typed in? If you go to your phones SMS editor, you’ll see how it starts with only a small space to begin typing. This makes sense because you’re typing a response generally, and responding to a message usually involves remembering what the message was, so it’s best to keep that handy and visible while composing a reply. 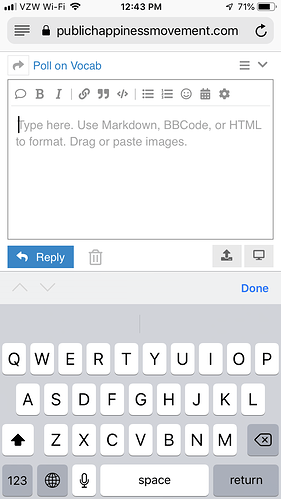 I agree that the composer takes up too much screen space. If users use our app they will get the very top nav bar back. We can also make the sites header hide, and come back anytime a user Scrolls up.

That would give us 10% extra space.

I quite like the live view editor, but tbh i rarely use it as it never tracks the screen correctly

this is how bear’s website describes it. it’s really not complicated it seems but i’m not a developer so that’s why i posted it here! 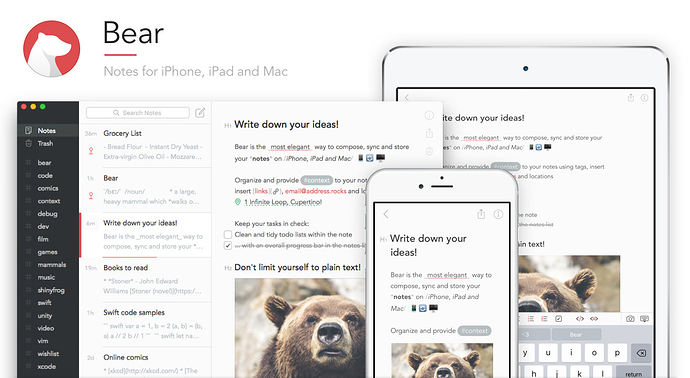 Bear is a beautiful, flexible writing app for crafting notes and prose.

I like that, and it seems the function is already half there. I think that’s one to send to the meta team as a suggestion. Fingers crossed someone has already built it.

Making it ourselves is possible, bit obv it’ll take longer

FYI, there are many discussions about wysiwyg on Discourse Meta. Type the wysiwyg keyword in https://meta.discourse.org/search.

I’ll need to research how “customizeable” is the discourse composer - potentially we could also add a button onto the mobile composer that, rather than collapsing the entire thing, could reduce its size by half so that you can see the original thread and your draft together.

I don’t think you can combine the preview and the editor though - the discourse developers are allergic to that concept and made it impossible by design:

Summary outcome of the debate on wysiwyg?

Continuing the discussion from Who would prefer a standard wysiwyg to markdown?: The above discussion was pretty busy and the thread is now closed with some comment about a proof of concept. To save me having to read all 77 posts, could somebody...

Hahaha I love how you worded that. Yes indeed that was the sense I got when combing through their threads. Thank you for looking into it though!