Go to the map:
https://publichappinessmovement.com/docuss/m_gather

Click on “Gather” at the top right which opens up the modal form.

The “Clear All Fields” button at the top right of the form has a white background and white text so it cannot be seen until its clicked or mouseovered.

@AndyatFocallocal I would like to work on this one

I’m sorry but, is this bug related to the master_withoutDCS branch? Because the layout looks kind of different. I wonder if it is related to what is in the master branch.

The bug can’t be reproduced on the master_withoutDCS branch.

I’m not sure about the branch because I didn’t work on the website but the bug was found on the live site. I assume it’s the master_withoutDCS branch since I’ve heard that is the current master branch. @AndyatFocallocal could you clarify this?

Master_withoutdcs is the only live branch now. The sysadmin team decided they wanted to have just one codebase running until we need more specialisation. All differences are defined in the i18n folder (a language app).

Why brightertomorrowmap.com looks different is a bit of a mystery. It seems to be not able to compile the new code so it’s reverting to the last known good version.

I’ve asked @tmcnulty, the senior dev in the @SysAdmin team, if he can see what’s going on

For this task just focus on publichappinessmovement.com and masterwithoutdcs, and the changes will go to both when we work out what’s up with btm.com

@AndyatFocallocal @bob thanks for the reply!

I’ll wait for @tmcnulty answer, then. Because I couldn’t reproduce the misbehavior on the master_withoutDCS branch

Hey @caike08 do you have an instance of the app running when you checkout master_withoutDCS?

Can you push a working version of that to that branch?

do you have an instance of the app running when you checkout master_withoutDCS?

Nope, I don’t. I made sure that I would have the most recent version before I ran the application.

I’m sending the screenshots, so you guys can see there’s nothing wrong with the “Clear all fields” button. 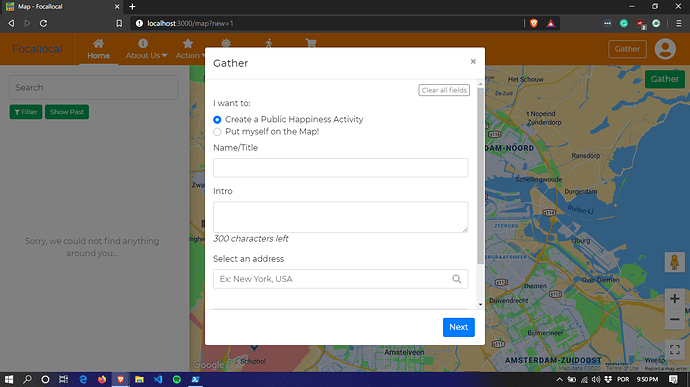 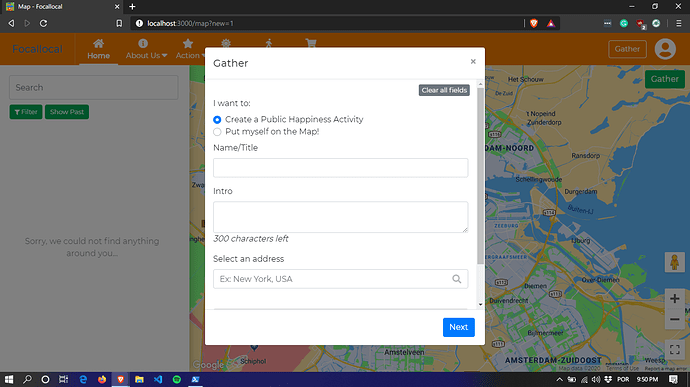 @tmcnulty did I answer your questions?

It looks like that task must be already completed and someone forgot to move it into the ‘done’ column.

We had just moved the team to this platform when the went quiet so everyone was new to using it.

Well done getting local host set up. Hopefully that’s the only one left which has been completed but not moved.

Brightertomorrowmap.com isn’t showing the latest build, Tom in the sysadmin team is working to fix that right now. Publichappinessmovement.com is showing the current build state.

It looks like that task must be already completed and someone forgot to move it into the ‘done’ column.

Yes, it seems so! So I’m checking if there’s another task that I can do. If you guys need something with this one, just tag me, so I can check it out. Cheers!

Hmm. I don’t see this on the live site (android and chrome)

@AndyatFocallocal @tmcnulty could you guys please confirm which branch has the same code as in https://publichappinessmovement.com?

Because the code I pulled from master_withoutDCS isn’t the same as on the website. Again, here is a screenshot of the localhost, but now as in a smartphone. No errors, again

I just made a test. I’ll let you know asap

@caike08 the master_withoutDCS branch is definitely live. Note I added ‘test’ to the title on the live site.

I can’t think of any reason that it would show the button text on local host but not on the live site. I checked on focallocal.org too incase the discourse CSS was interfering but the button text doesn’t show there either

It’s 2am here so I’ll have to leave you to explore what’s going on. Good luck, it’s an odd one

I’ve noticed that there are a few differences between what’s in https://focallocal.org/ and master_withoutDCS. I took some screenshots, so you can see they aren’t the same version.

I know it’s weird, but I don’t see anything to fix on master_withoutDCS branch. Maybe we can find out what branches are being used in both https://focallocal.org/ and https://publichappinessmovement.com/

I’m having some webpack/sass package issues. Once I resolve these I can get the code pushed correctly.

Comparing the build configuration files it looks like both the master branch and master_withoutDCS branches are building to the same endpoint. I have to check the machines to see if the app names are different or if they just constantly overwrite each other.

2 Likes
Bug: All content except navbar disappears when clearing all fields in map
next page →